Ten years ago I was a bitter arrogant college student (with no smartphone), then met some really creative people. With these creative people, we made a group that created YouTube skits together, we eventually evolved into making games together after founding a business with two close friends of mine. It was through the studio that I was fortunate to meet even more talented and passionate people and it set the seeds for a lot of internships, degrees, and career opportunities for us.


For the second half of the decade I've been splitting my time between Southern California and Las Vegas trying to grow the studio while having a normal desk software career. I got to work for Mozilla Firefox for four years and helped them with their Quantum version that better competes with Google Chrome on load times, CPU usage and reliablity. (I'm still using Firefox as I write this.) I got to fly in an airplane for the first time and see Japan, Canada, Hawaii, and the Pacific Northwest and some of the midwest. Travelling has since become a hobby for me, and since 2015 I've made a point to see somewhere new every year. PS: I don't recommend going to Oregon. I re-established a dormant IGDA in Las Vegas and with the help of even more talented and experienced people expanding it to become one of the fastest growing chapters in the organization.

I wouldn't have expected the political climate to become as divisive as it has, and while some friendships did have to come to an end, I believe there is still a bright future ahead. Despite what political figures and certain celebrities and authors may think, I feel we as a society are becoming more accepting of each others cultures, identities, preferences and tastes as a whole than in any time prior.

I'm doing great! I'm doing fine! But I am taking a break from blogging for a little while. I've been going all in on the indie game business and we're finally starting to take off.

I may come back to this at some point -- But for now, the best thing I can do mentally is work on my projects and relax with my Nintendo Switch to wind down the day. Also, exercise and healthier eating.

Stay well, and hopefully I'll come back soon when I have a bit more free time.
Posted by GroverWhim at 10/30/2019 No comments:

So for that late night Pokémon Sword/Shield rant I promised...

I think restricting the game to only the ones that appear in the regional Pokédex is not a great idea. The designers put themselves into a hole by having 800+ Pokémon and now not enough resources to model and animate them all for the new generation.

You can cite gameplay balance and development concerns for not including them all, but they simply should just be restricted from competitive play if that's the case.

If this is the trend they're going in to combat the growing amount of available Pokémon, then I think it's time for me to move on to other series. It seems hypocritical to play and get attached to Pokémon you've leveled up and trained for 15+ years only to not see it in the newest games based on seemingly random factors or preferences by the developers.
Posted by GroverWhim at 6/14/2019 No comments:

Link's Awakening on the Switch plays faithfully similar to the Game Boy version aside from having a few extra buttons and some quality of life improvements - It looks cute but it feels the same and that's really great
Probably my favorite game of E3 2019, with VII Remake a close second. Ended up getting some neat swag too. 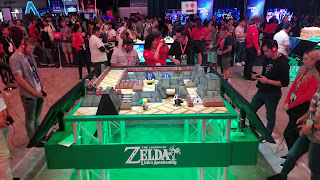 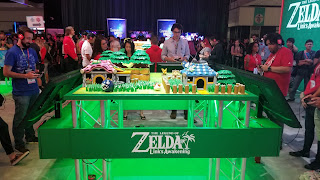 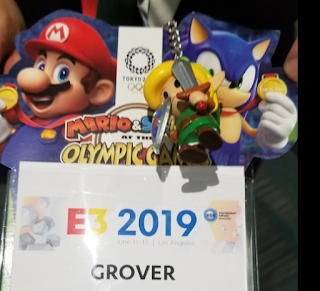 I have thoughts on Pokémon Sword and Shield but that will require my full keyboard because I have a lot to say about it -- Maybe later tonight
Posted by GroverWhim at 6/13/2019 No comments:

I got hands on with Paladin and Red Mage for FFXIV Shadowbringers - I really enjoy the simplified gameplay and how the actions are merged together, especially for Halone/Royal Authority and Verthunder now automatically changing to Verflare Also: Not sure if it was just the party or if it was the boss, but everything hits a lot harder, and Red Mage can't chain Raise as much since it takes a bigger chunk of MP
Posted by GroverWhim at 6/12/2019 No comments:

Played FFVIIR. No photos or videos were allowed. Plays like FFXV but more tactical and more mechanics. Also hi again FFXIII staggers. The reactor is smaller than original FFVII but the boss battle is significantly longer
Posted by GroverWhim at 6/11/2019 No comments:

Hey all! Welcome to the 50th development log for the studio. It's been almost three months since the last one. But first, I want to start off by saying that this will be the final development log we'll be doing in this format on my personal blog -- We've grown quite a bit since the first development log back when we started this in 2012, and future development logs will have more than just me posting about progress in the studio and will be posted on a new section on our whimindie website.

• Our studio is now on Discord! 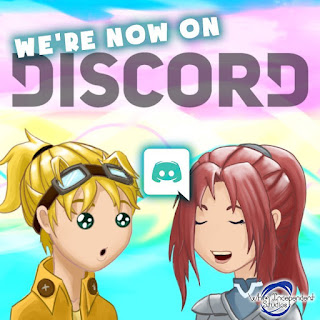 We've made the leap onto Discord, where we will be posting all kinds of new information about our games. We will be also communicating the progress of the Selatria beta testing.

If you have a discord, please join our channel! We will be doing giveaways over the next few months, as well as other exciting things.


• We are in the process of expanding whimindie into being an independent publisher and developer.

Last year, we completed work on our second mobile game: "The Dastardly Dairy Debacle" which was seen as a test for what we could do with a project pitched to us from outside the company and see it to completion. We learned a lot about this project and made a lot of mistakes and learned a lot of lessons along the way.

Over the past few months, Paul, Matt, and I met with several developers in Southern California and Southern Nevada to pitch their games to us for potential future studio projects. This last weekend we had our last pitch reviews. While I can't go into too much detail about what these games are just yet, this is going to be an exciting next step for the studio. Some of the games are really awesome and are genres we've never worked on before. And we hope to bring these games to PC as well as Mac and consoles!

• We are now self-publishing Selatria on our distribution platforms going forward!

What does this change mean? For the first time, we will be able to better support the players on our Steam platform, and make the update timings more consistent with our other release avenues. For players who purchase Selatria through itch.io, we will be able to provide a steam key with your purchase. In the coming days, we'll be moderating the Steam discussion boards with our usernames with developer tags to better assist and patch problems.

You can buy a copy of Selatria on Steam here.

We're also looking into people who have purchased a copy of our game in the past and providing steam keys retroactively. Although I can't promise we will be able to do this, we're going to look into it. We will also for the first time be able to sell Steam codes for Selatria: Advent of the Dakk'rian Empire at conventions. We're working very hard to have this ready for LVLUPEXPO. Speaking of which...

• We will be making an appearance at LVLUPEXPO 2019!

We will be making an appearance at this year's LVLUPEXPO at the Las Vegas convention center at the end of April. Players will be able to see a lot of improvements we made to our game, buy steam codes, charms and buttons we'll also be hosting a raffle for a Nintendo Switch gaming attire, and other prizes.

Here's a preview of what the charms and buttons will look like! Photos by EISS Photography. 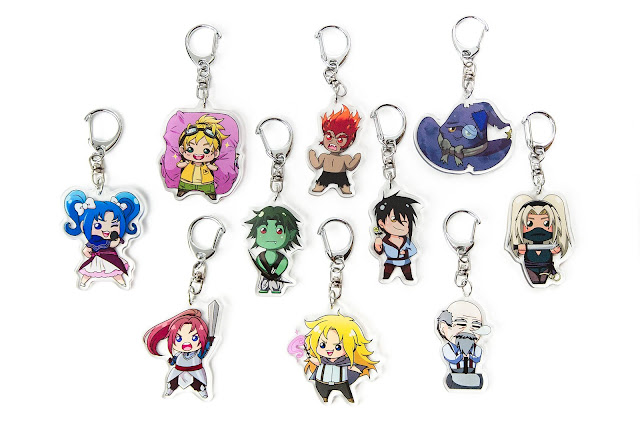 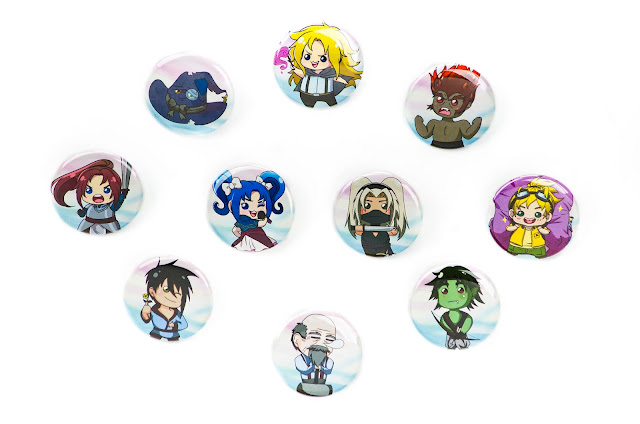 You can purchase tickets to LVLUPEXPO here.

On Saturday, April 13 we plan on putting a new update to Selatria: Advent of the Dakk'rian Empire across all of our platforms. There will be new features, such as unique victory poses for characters, the ability to skip to the title by pressing a button, and Quick Save functionality! Among various other minor bug fixes and tweaks.

Here are some screenshots to show off some of the new content and quality of life improvements. 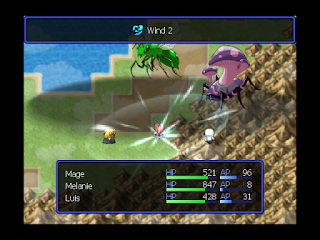 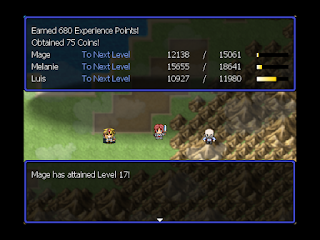 As for what's coming in the pipeline, I want to show some of our progress in Chapter 4. As of this post, we finished cutscene production, and are currently in the polish and adjustment phase. Here's some footage of what's to come in Chapter 4. And do note that what you see is in development is not final and is still subject to change. 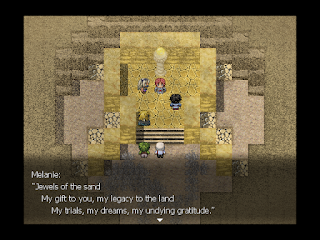 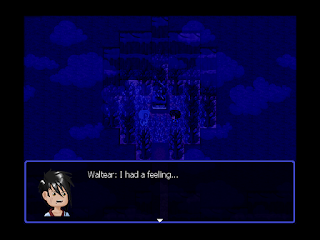 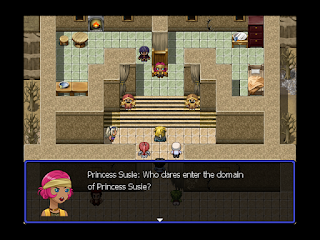 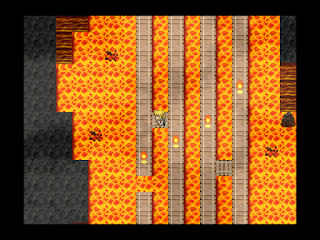 Players who own a copy of Selatria: Advent of the Dakk'rian Empire will be invited via email to beta testing for Chapter 4 of Selatria to try the game! We're aiming for some time after LVLUPEXPO. We're also looking for beta testers as well, and we will be providing more information about beta testing Chapter 4 on our Discord server!

That's all for this development log. Thanks for reading, and see you at LVLUPEXPO or on Discord!